Save time by auto-compiling and auto-running your application

One of the most important attributes of Linux is being able to customize and automate everything to your needs. When working under a Linux environment, you should take some time to abbreviate and automate tasks and single steps that you do repeatedly; even small “micro-optimizations” will save a lot more time in the long run: After a while, you will see how you can stick together small things to create more complex time-savers.

The first step is writing bash aliases, bash functions and small shell scripts to ease your daily workflow. If you keep setting up your development environment manually everyday (e.g. by opening an editor, a terminal for compiling, etc) don’t go right into creating a huge script for setting this up automatically - usually, this won’t be correct in the first try and you will need way more time to develop this script.

Instead, start small. For example, if you constantly switch between your editor and the terminal to compile something (or if you keep hitting the compile button in your IDE), use a tool like entr to automate this:

entr is a small tool which repeats a given command when a file in a given list of files changes. The find command lists all *.cpp files and feed it into entr, while omitting everything in the .ccls-cache directory. Of course this is just an example, but you can adapt it to your workflow very quickly.

Now by putting this function in your .bashrc, you will be able to start an infinite compile session when you start working on the source code of your application. Constantly switching between your editor and a terminal window (or hitting the build button in your IDE) is no longer needed, giving you more time to do your work.

Of course you can go one step further; if you restart you app after it has been compiled successfully every time anyway, why not add another function for this?

Executing run-my-app and compile-my-app will now cause your application to be restarted automatically every time you change a source file.

At first, this might not seem as much of an improvement; however, if you use functions like this for the majority of your workday, you will realize that the typical “compile-try-change-recompile” iteration becomes very fast. Furthermore, since compiling and executing the application happens automatically, you will get rid of some cognitive load and improve your concentration.

Originally, this post was intended to contain a list of useful bash aliases, functions and scripts. We will save this for another day.

Fix for Keepass crashing under Linux

If you want to try out the free password management solution KeePass under Linux and experience crashes every time you press the Windows key, there is an easy fix:

Edit /usr/bin/keepass2 and change the line

The developers of Keepass have acknowledged the problem, but sadly they can't do anything about it, since it is a bug in Mono and not in Keepass: https://sourceforge.net/p/keepass/bugs/1545

Running applications only when you are idle

On a typical desktop PC, there are several long-running tasks with a high I/O load which usually need to be executed regularly — like backups, indexing files for search, checking the backups, etc. Tasks with high I/O load however can cause bad responsiveness of the system under Linux, which results in applications being frozen, the mouse cursor not moving, etc.

With the most systems this can usually be fixed by selecting the CFQ scheduler in the kernel. If you are running particular new hardware however, this might not work since e.g. the kernel does not support setting an I/O scheduler for those new fancy m.2 SSDs. Running an application like recollindex or borgbackup on one of those disks can completely fubar the desktop until they are done.

To work around this problem, I've created the following script:

It is called execute-idle.sh and designed to run these tasks only while you are not using the computer (e.g. when you are in the kitchen for 10 minutes, waiting on the cup of coffee).

execute-idle.sh first starts the task specified as an argument, then pauses it immediately by sending a SIGSTOP. Then it calls xprintidle every 5 seconds to check if you are still using the computer — if not, it sends a SIGCONT signal to the process and all of its children, letting the job continue. As soon as you return and type on your keyboard or move your mouse, execute-idle.sh again sends SIGSTOP to the process and its children, pausing the task until you are idle again.

How to use it

You might think that this causes some jobs to never finish, but after using this script for several weeks I didn't encounter any problems like this. Due to the rather short 5 second interval, execute-idle.sh can utilize even small breaks of e.g. 30 seconds.

Try running your backup with it — your regular backup check job should tell you if something went wrong.

If you try to run Cura under the latest Fedora, you might experience that the application just doesn't start - at least that was the case for me.

Running strace and digging through the log made clear that Cura was looking for several files under ~/.local/share/cura/v3.0 (or v2.7, depending on which version you have installed), while these were installed under /usr/share/cura.

The fix is to symlink/copy these files to your home directory:

Also, don't forget to add yourself to the dialout group if you want to use your printer via USB:

KDE Plasma applications outside of KDE

If you ever use KDE/Plasma applications outside of Plasma (e.g. under i3) and experience theme problems and/or missing icons, try this:

While this is not recommended, it works for me; using this command, I can now use skrooge under i3 with icons, nice fonts and the plasma GUI theme.

Rust's error handling can be very exhaustive, both in terms of safety and verbosity. Consider the following example:

If you have a lot of statements like this, your code can get very verbose, which is why this has been addressed by the if let syntax:

Now this is much shorter, but what if you have multiple chained operations? Of course you can use and_then, but this will cause you the loss of any possibility of error management:

If you use if let, it will look like this:

Convoluted and hard to read.

There was a RFC for including something like if !let x = get() { error management }, but it didn't caught on. What nobody online however doesn't seem to mention is that you can create something like this:

I admit, that looks very convoluted. In another RFC the following syntax was proposed, but postponed for now:

So I guess for now we will have to live with either the convoluted syntax or a lot of lines/indentation.

Deploying apps with QtWebEngine for Ubuntu

QtWebEngine is a very handy C++/Qt module for creating applications with embedded web content. It carries a complete Chromium browser and allows you to embed HTML/JS content in your application or to modify such content as you wish. 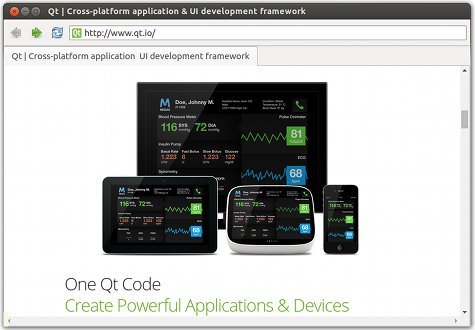 If you however want to deploy this application to Ubuntu, you will be faced with two problems:

Luckily, we can overcome this problem by utilizing the new snap package format which has been introduced into ubuntu 16.04. A snap package will allow you to distribute your application shipped with a Qt version of your choice, allowing to include QtWebEngine and to comply with the terms of the LGPL (Note: I'm not a lawyer. Check with your legal experts if your application is proprietary and if you don't want to make your source code publicly available).

If you are new to snap packages, I'd advise you to read the official tutorial, called "Build your first snap". It takes about 5 minutes to complete and will tell you everything you will need to know to distribute your application.

The remainder of this article will assume that you have basic knowledge of snap packaging.

We start first by adding your source code to the snapcraft.yml file. For the sake of this tutorial, I will use the QtWebEngine minimal example, which is included in the Qt sourcecode:

For adding Qt to our build, we will need to complete several steps:

The last step is needed since the QtWebEngineProcess looks for it's resource files at some hard-coded paths and in the path where the executable lies. Of course it would be nicer if we could omit this step and put everything into /usr in the snap environment, but as far as I know, this is not possible.

Anyway, here is the qt part for the snapcraft.yml file:

One of the ubuntu header files uses the notation // for commenting at one point instead of /*. Since QtWebEngine uses the flags -pedantic -Werror internally, this causes the build process to fail. Therefore we need to patch this file:

This patch file called c-comment.patch is applied during the build stage by a helper script called patch.sh:

That's it; our snapcraft package is complete.

To be honest, this is a lot of stuff to deploy an application and the resulting package is rather big; furthermore, this doesn't seem to work with Ubuntu 16.10/17.04 due to changes in some libraries (if you know a solution, write me a e-mail).

Nevertheless, it shows that all kinds of programs can be packaged and deployed using snap.